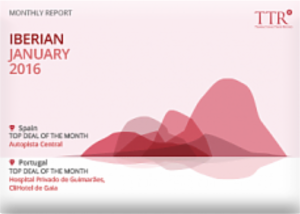 SPAIN – In January 2016, the Spanish transactional market registered a total of 106 mergers and acquisitions, both announced and closed, generating an aggregate value of approximately EUR 3.79bn.

PORTUGAL – In January 2016, the transactional market registered a 36% increase compared with the same period last year. A total of 15 deals were registered, both announced and closed, including asset acquisition.