The Miami-based consulting firm, Attitude Consulting, has just presented the results of its survey for foreign investors in Latin America carried out in the last months of 2016 among lawyers from some of the leading law firms operating in Latin America. 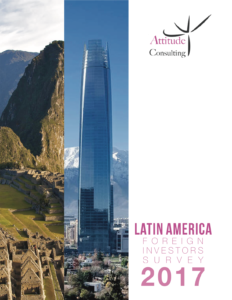 The current study “Latin America: Foreign Investor Survey 2017” is, as its name suggests, the result of a survey carried out by Attitude Consulting in the last months of 2016 between lawyers from some of the main business law firms operating in the region

The responses are encouraging and demonstrate the dynamism of the Re-gion and the real efforts being made to create an adequate framework that will effectively attract foreign investors beyond some claims not accompanied by politics and serious structures of which the Region has been accused of in the past.